In mid-2009, I had to understand what was happening and why it kept happening to different people around me, and so I began reading about personality traits with regard to regions of the human brain.

Much research has been compiled from studies done on victims of stroke, cranial injuries, and genetic conditions.  I scribbled down a synopsis of relevant findings on my whiteboard (which also included my TODO list at the time)... 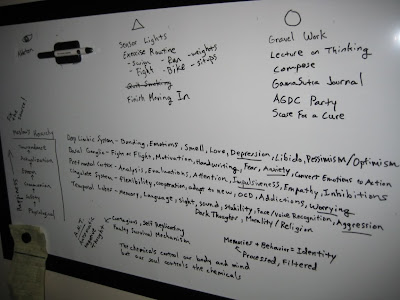 An overactive limbic system often leads to an inability to regulate emotions.  Selective Seratonin Reuptake Inhibitors are often prescribed to cap the intense peaks and valleys often experienced by those with bipolar disorders and similar emotional imbalances.

Of notable interest is the potential association between anxiety and handwriting.

The temporal lobes are particularly susceptible to outer head trauma.  Accident victims with head injuries may exhibit symptoms of damaged cells in the temporal lobe region.  This can often affect a person's sense of judgement, language, and morality.

And the cingulate system... this is where your buttons live.  Game developers, marketing firms, and drug dealers alike would very much like to have direct access to this region of your brain in order to convert your compulsions into agents of their system.

But they can't get in if you already have a religon.
Posted by Kain Shin at 12:56 AM