Fatherhood and the Eulogy of Hyun Mo Shin

It took me a while to understand that I was not like most of the other kids in school, and it took even longer to understand why. My childhood had its tender moments, but was often marred by a constant sense of fear. The consequences for my mistakes as a child were brutal, severe, and worst of all... Emotional.

My father was the main villain in my life. He is the antagonist in my first vivid childhood memory at the age of One when I woke up to my mother's screams. Escape, independence, and prediction became a driving force in my development as emerging abilities began to manifest. I had to get out of there, and I had to go very far and beyond the reproach of anybody who can possibly wield any power over me. Eventually, I succeeded. As a young adult, I had the freedom to choose my own family, and my friends became more important to me than blood relatives with whom I shared no empathy.

In 2005, I got a call from a person claiming to be my father's son. He told me that my father had been in and out of the hospital for the last 6 months, and these might be his final days.

Over the course of the following two weeks, I talked to many people with regards to my father's personal effects and legal affairs, and through these conversations as well as a few rare and precious lucid moments with him in the hospice, I began to see him not as a monster, but as a human being... one who was flawed and scared, but always tried to do the right thing with what he knew how to do... one whom I had greatly wronged.

As the only legal next of kin to my father in the United States, it fell to me to sign the DNR form (Do Not Resuscitate) that would allow him to finally rest instead of being revived after every heart attack. I got to know my father as a human being in the last two weeks of his life, and then I ended him.

This is the eulogy of Hyun Mo Shin that I composed and delivered at his funeral:

My father was born on July 10th, 1924 as the youngest of nine children within a family of rice farmers. He died peacefully in his sleep at 1pm on April 8th, 2005 at the age of 80 from a combination of prostate cancer and kidney failure. From what I know of him, he went to Gae-Oh University in Japan during the occupation of Korea where he learned to speak English. This allowed him to work with the United States CIA during the Korean War translating North Korean enemy transmissions to the American forces. During the Vietnam War, he ran a shop that supplied goods to American soldiers, and that is where he met my mother. When Vietnam fell in 1975, he arranged for her and their unborn child to travel by boat to Korea so that she and their son could live a better life away from oppression. From Korea, they moved to Australia for a short time but eventually settled in Iran where he ran a successful Chinese restaurant and lounge. When the Iranian Shaw was overthrown, he moved his family to Houston, Texas to start a new life over with a new Chinese restaurant. That business failed, and he was eventually forced to take a job as a maintenance man in an apartment complex. With the help of his soon to be lifelong friend, Bill Bokovoy, he moved up the ranks to eventually manage various apartments and convenience stores in the Houston area. He also managed a janitorial service. In 1996, he met Kim Soon and adopted her family as his own. Towards the end of his life, he worked as a tour guide for Japanese and Korean visitors to the United States.

People describe him as a very intelligent, kind man with a noble soul and a gift for making others laugh. He was able to speak English, Japanese, Chinese, Spanish, Vietnamese, Arabic languages, and of course, Korean. He was always teaching me the value of doing the right thing. He loved to travel and go fishing, and I remember him as a man who lived his life to the fullest… whether it be a trip to the Super Bowl in between dialysis treatments or an indulgent meal at his favorite Asian buffet. Some might have described him as an incorrigible but charming ladies’ man, but it wasn't just about the women for him. His love for life transferred to all aspects of his interaction with those around him. He dedicated his life to his family and his community in the name of love. He would welcome Korean immigrants to Houston and volunteer his time to do whatever he could to help them get settled into American society. His last wish to me and my newfound brother was to make sure that his family would be okay… to his dying day, he was thinking about the others in his life.

When somebody we know passes away, we can't help but think about our own mortality. All of you are here because my father’s life has affected you in one form or another. As I found out more about him, I began to see the waves and ripples he has created in the lives around him as he continued to live his own life, and it made me realize that we all create waves and ripples in the lives around us whether we choose to or not. After we’re gone, all that’s left are the waves. The world we live in and who we believe ourselves to be is a reflection of signals from the people around us. I feel that my father has lived a good life, and I see the proof in the people that are here in this room. Thank you for listening.

The humanization of my father is my own origin story. It marked the beginning of a drive to understand more about the world than I was capable of comprehending at that time. The universe suddenly seemed very large, and my life suddenly seemed very small. I began to actively examine just how tenuous our belief systems, identities, and relationships truly are and how much control we have over the meaning we give ourselves within the course of an unpredictable lifetime that may or may not actually be meaningful to anyone else. 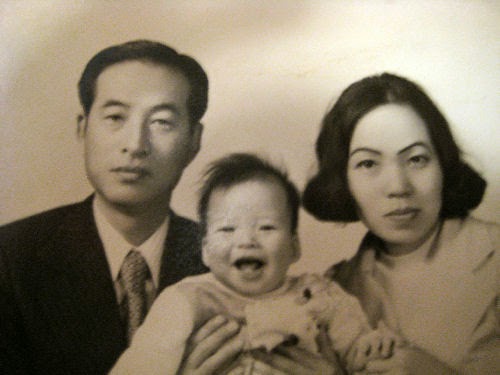 Today marks the ninth anniversary of my father's death. That story is still evolving.

My first child is due at the end of August.
He feels like a stranger at this moment.
I hope the story between us ends well.
Posted by Kain Shin at 1:48 PM